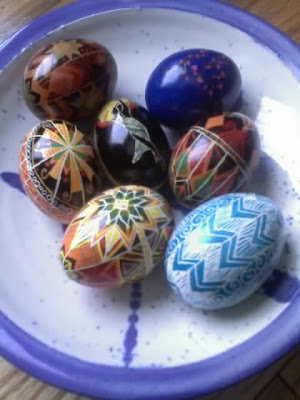 Here are some of my Pysanky Eggs. I will be buying a smaller kiska next payday and hope that will help with making the smaller lines.

Pysanky (pysanky-plural, pysanka-singular) is derived from a Ukrainian word meaning "to write." Pysanky are eggs (either whole raw eggs, or hollow) which have been decorated with a wax-resist method where one draws (or "writes," as Ukrainians would say) those portions of the design which you want to remain the color underneath the wax. A small, hollow funnel attached to a stick is used to heat the wax and write with. This tool is called a kistka

Archeologists have discovered ceramic pysanky in Ukraine dating back to 1300 B.C. They have linked pysanky designs to those of Egyptian ceramics created in 1500 B.C., and to symbolism of the Trypillian culture in Ukraine of 3000 B.C. Six thousand years ago, the Trypilljan culture flourished in Ukraine. The society existed 3000 years before biblical Abraham and long before Greek mythology and the Bronze Age. Trypilljan people lived in the land of Ukraine at the same time as the Egyptian pyramids were built. The Trypilljans were a matriarchal society that worshipped "mother earth" and had little interest in power struggles concerning politics, taxes, money and ruling, as in patriarchal societies. In both design and color, Trypilljan symbolism echoed the people's close attachment to the soil and other elements of nature. Ukrainian symbolic art is based, in large measure, on these early ideograms. The most notable example is the Ukrainian meander or unending line, which denotes the cyclical nature of life. Other examples include such motifs as the circle, cross, stars, dots, matriarchal symbols, wheat, fir tree, horse, stag, horns and bear's paws

With the acceptance of Christianity in Ukraine in the year 988 A.D. pysanky became a part of the Christian tradition of Easter and now took on the meaning of the rebirth of man and the resurrection of God. The egg symbol was likened to the tomb from which Christ arose. There is no point where we can determine where the pagan beliefs and customs of pysanky end and where the Christian symbolism begins. In reality a subtle blending of both has occurred.
Posted by Little Messy Missy at 4:53 PM 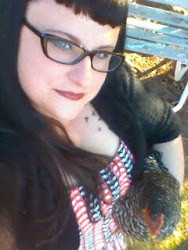 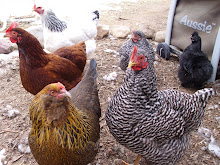 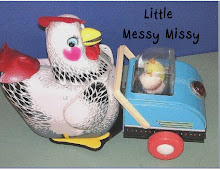 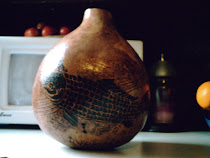 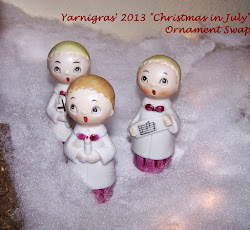 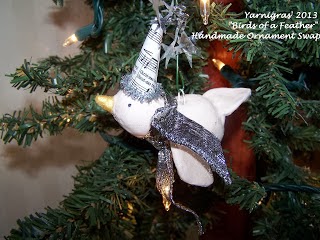 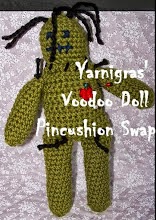